THE FESTIVAL OF ONAM FOR KERALITES

Onam is a harvest festival and the biggest festival of the state of Kerala. with joy and enthusiasm all over the state by people of all communities, the festival is celebrated to welcome King Mahabali, whose spirit is said to visit Kerala at the time of Onam. The festival lasts ten days. The first day, Atham and tenth day, Thiruvonam are the most important of all. Popularity and presentation of the rich culture of the state during the festival made Onam the National Festival of Kerala in 1961. Thousands of tourists visit Kerala to be a part of Onam. 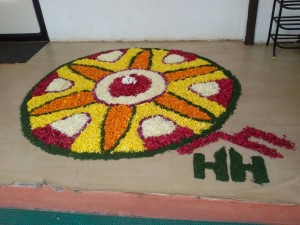 According to the legends, a very long time ago, an Asura (demon) king called Mahabali ruled Kerala. He was a wise, benevolent and judicious ruler and beloved of his subjects. No one dared to lie or cheat, everyone was considered equal and lived in prosperity and justice. Soon Mahabali’s fame as a great king began to spread everywhere, but the gods grew envious at his acts of benevolence and growing popularity. When he expanded his rule to the heavens and the underworld, the gods felt challenged and started to fear his growing powers.

Worried that he might have more power than the Devas, the mother of the Devas, Aditi, pleaded with Vishnu to diminish Mahabali’s powers. Vishnu transformed into a Brahmin dwarf avatar called Vamana and went to see Mahabali while he was performing a yajna and asked for alms and Mahabali granted him a wish. The Emperor’s royal counselor, Shukracharya, warned him against granting the dwarf brahmin’s wish, for he realized that the seeker was no ordinary person.

But he firmly declared that there is no greater sin than going back on one’s promise. He kept his word. Vamana asked for a simple gift, the amount of land he could measure in three steps and the king agreed to it. Vamana then increased his size and with the first step covered the sky, and with the second, stood on the underworld. Knowing that Vamana’s third step will destroy the earth, Mahabali offered his head for him to step on for his last step. Vishnu’s third step pushed Mahabali to the underworld, but before banishing him to the underworld, Vishnu, moved by his integrity and humility, granted him a blessing. Since he was a great king and loved by his people, he was allowed to return once a year from exile.

Onam is a celebration for the homecoming of King Mahabali. It is the day when each Keralite pays a grand tribute to the memory of this benevolent king who gave up everything for his subjects. Some say that this fatal step was a blessing in disguise for the good king, giving him immortality. That is why Onam is celebrated by wearing new apparel, it represents a new life of truth, piety, love, and humility.

Onam is the only festival that is celebrated equally by people of all faiths and castes in India. Unlike Diwali, Eid or Christmas, it has no explicitly religious connotation. It is an occasion for joy, compassion, gift-giving and solidarity, and embodies Kerala’s cultural unity and pluralism.

Saving Your Space In Apartments

Space management is a big question that arises when budget flats and apartments are...

BEST BUILDERS AT YOUR BENEFITS

<>Ready To Occupy Villas   What are the desirable characteristics of the ideal builders...

Discover the ideas to enhance the value of your home

Do you own a house or planning to buy one? What all are...